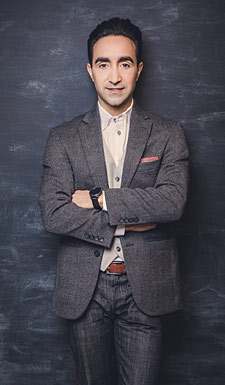 Born in northern Iran and raised in the opposite side of the world in Burnaby, BC, Sammie Astaneh holds a BCom degree in finance from UBC’s Sauder School of Business and received producer training from UCLA’s Professional Program in Producing.

Before working with Lighthouse Pictures and starting at the bottom as a production assistant in early 2010, Sammie produced five short films, co-produced an indie feature film, and developed several documentaries and feature films, including a horror script based on a treatment written by an Emmy-nominated Hollywood luminary.

Since working with Lighthouse in the summer of 2016, Sammie has earned 13 producer credits, including the Netflix Original film, 1922 (Thomas Jane, Molly Parker), which is based on a Stephen King horror novella, and Hallmark’s Hearts of Winter (Jill Wagner).

In 2018, he was brought on as a Development Executive, where he works alongside Jamie Goehring to develop and produce original film and TV content. Sammie’s efforts have led to Lighthouse’s development slate consisting of projects written by Oscar-nominated writers and some of the industry’s up-and-coming diverse talent.