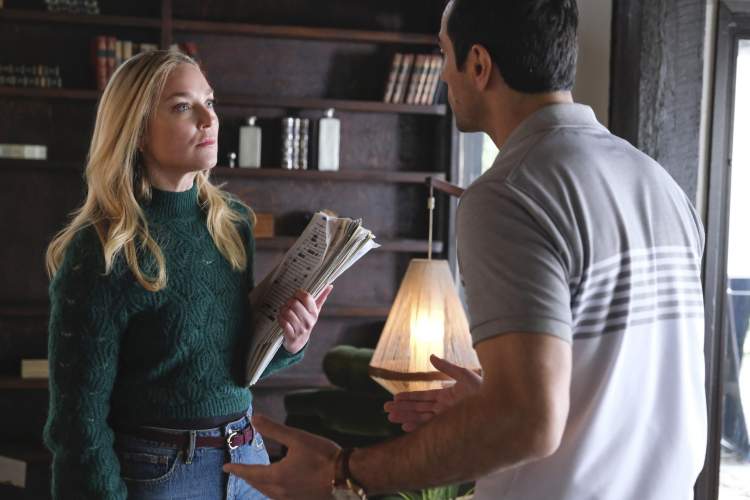 Lifetime has done it again with a harrowing but thoughtful film on domestic abuse.

Sleeping With Danger is the first in a two-night true crime series based on Ann Rule’s Mortal Danger True Crime Collection.

And with incredibly strong performances by Elisabeth Röhm and Antonio Cupo, powerful writing, and artful direction and more, Lifetime delivered a compelling and impactful piece.

When Kim Raver and Manu Boyer come together with Lifetime for films, magic seems to happen. We’ve seen it before with the Jane Green book-to-series event, and we are seeing it again now.
It’s something about the style of their films that feels unique for the network. Their movies are elevated and high-brow.

They never exhibit a hint of camp, and they somehow skirt that indie vibe that’s just a touch dramatic.

Remarkably, a network that can bring us cheesy Christmas movies and campy thrillers also excels with some of the most beautifully crafted, artful films, and Sleeping With Danger is part of that latter list.

Notably, they took the subject matter and that it’s based on real events seriously. It wasn’t salacious in any way; instead, they delivered a grounded, sincere film that was haunting and kept you engrossed.

It felt every bit as mesmerizing as the page-turner book it pulls from. What makes or breaks a film like this is the collection of actors utilized to tell the story, and it goes without saying that Röhm and Cupo were extraordinary.

Both are no stranger to incredible performances in other works, including in other films on the network, but they raised the bar here.

Röhm as the aptly named Grace, brought such a rich vulnerability and relatability to the intelligent, beautiful flight attendant longing for a fulfilled life.

Her voiceovers were among my favorite aspects of the film.

She didn’t limit herself to longing for love and a family and lamenting the absence of it in her life. Her yearning for happiness and betterment — in whatever form it came into her life, was so decidedly human and real. And when she met Paul, it was a matter of falling slowly and then all at once.

I know now what it’s like to look into the face of a man who has professed to love you fully, unconditionally, and forever, then watch his lips form the words “I’m going to kill you.” Grace

It was easy for Grace to fall in love with Paul. He was handsome, charming, loving, and kind.

Their steamy love affair was so organic that you would’ve rooted for them if not for the awareness of how things would end up.
Röhm and Cupo’s chemistry was electric and alluring. You can’t manufacture that if you tried, which pulled you deeper into the story.

Often, stories of abuse can lack nuance. Yeah, there is sympathy/empathy with the survivor or victim of it, but observers are left wondering so many things.

“How did they not see all the signs? Why didn’t they just leave? Why do they keep going back?”

Grace’s friend Sheri captures that sentiment well. When Grace recounted what happened when Paul slapped her for the first time, Sheri responded that “once was all it would take for her.”

Grace’s reaction was defensive and scathing when she commented on Sheri’s rocky love life.

But even as viewers, we instantly knew and even could agree with Sheri while also understanding Grace’s hesitance.

Sheri: Has he ever done anything like this before?
Grace: He’s blown his stack before, but he’s never hit me, no.
Sheri: Once would be enough for me.
Grace: You know that’s real easy for you to say that Sheri because you’ve never been in a relationship very long.

She pushed him during their argument, and he slapped her in response. Given that, couldn’t you understand why Grace would dismiss that as a one-time reflex instead of a new habit?

She saw the tiny little red flags and addressed them as they cropped up. When Paul’s jealousy reared its ugly head, she stopped him in his tracks to point it out and discuss it.

She established her boundaries and communicated with him, but he didn’t always heed her words.

The first time Paul got rough during sex and left her bruised, she confronted him and calmly told him what happened and how he didn’t listen or hear her protests.

When she found out about his previous lawsuits for harassment, sexual assault, and restraining orders, she confronted him about it. And he spoke to the high rate of lawsuits against doctors to explain away the issues.

The open line of communication Grace was willing to have from the beginning about Paul’s temper, his drinking, his jealousy, and his possessiveness captured the complicated web of being in an abusive and toxic relationship.

It wasn’t that Grace didn’t see the little red flags. It’s just that by the time they became a full-blown banner it was too late.

Their relationship was sneaky in that way. The problems were there in the open, but there was always enough love and caveats that clouded Grace’s sight and had her staying anyway.

Grace was resistant to changing herself and what she wanted, and yet she never saw how she compromised herself to accommodate Paul. She slowly gave pieces of her agency away bit by bit in the name of love, and she thought it was her controlling the situation the entire time.

Paul was a classic abuser, but he was so seemingly good that it was understandable that Grace didn’t see it until it was too late.

Cupo’s execution of Paul was remarkable, and I do wonder if he studied and researched extensively to nail that balance between being utterly terrifying in one instance and impossibly endearing in the next.

The Paul I fell in love with was always there. The problem was he wasn’t the only Paul I was living with. Grace

He peppered her with sweet words and phrased things in such a way that it sounded romantic when it should have been concerning to anyone who let his words and behavior sink in.

He told her things like how intensely his feelings were for her and that he never loved anyone as he did her. He would say he couldn’t help going a little crazy when she wasn’t around.

All the while, he took little measures to control her. He made her a partner in his Nutristave venture and not only urged her to cut back on her job as a flight attendant, but he took the liberty of speaking to her employer on her behalf.

He sprung it on her like a surprise and was instantly livid when she didn’t act as excited as he felt she should. He took measures with her health and body, dictating supplements and things she should eat.

He proposed to her in public because he knew she would be less likely to say no to him. And you could tell from her face that she wanted to decline.

He tried to alienate her from her friends and those close to her. He took one conversation that she had with him and took the liberty of speaking to Sheri and suggesting that the women take a break from each other.

And even though Grace and Sheri called him out on that, Grace pulled away from her friend anyway. She thought it was easier to subdue the tension between the two people in her life she cared about most.

He surrounded her by his people, so when she recognized the extent of what was happening, she had no one to turn to anymore.

And his apologies always seemed sincere. He had a reason and excuse for why he did something and behaved a certain way.

Grace described it perfectly when she said it was like she was living with two different Pauls. But by saying that at all, she bought into this misbelief that he was either one person or the other.

Paul told her that the explosive, violent man she would see and experience wasn’t really him. It’s as if he could divorce himself from his actions and curtail accountability.

Paul threatening her with the gun and shooting at her should have been the breaking point, but it was like she invested too much into their relationship to give up.

When she fled to a women’s shelter, you knew she was where she needed to be. Unfortunately, she didn’t believe so.

Because she felt Paul didn’t meet every last point on a criteria for abusive relationships, he somehow wasn’t.

Looking back on things now, I should’ve seen what was coming, but I never loved like that before. I saw what I wanted to see. Grace

You could tell Grace thought she was too intelligent, or too strong-willed or whatever else to be a victim.

And part of this was Paul’s doing– it was his intent. He lured her back in with the promise that he was working on himself and the explanation that he suffered from Bipolar Disorder.
21 Male Characters Who Couldn’t Take No for an Answer
START GALLERY

We never found out if that was the truth or not, but it’s not surprising that once again someone would hide behind mental illness to suggest that it’s immediately connected to violence.

And it was one more way for him to rope Grace in by making her believe that she could support and help him through things like his mental illness, or his jealousy, or his anger.

I go crazy when you’re not around. I can’t help it. Paul

Grace thought she could help Paul become a better person, but he wasn’t. Nothing Grace did or said could change that.

Paul whisking her away to that cabin was already disturbing — the isolation was palpable and perfectly encapsulated their relationship in its entirety.
Because this took place before everyone had cell phones, it heightened Grace’s ordeal.

He poisoned her and cut the landline. He got rid of her car and kept the keys to his out of reach.

You could almost feel Grace’s alienation with her. And maybe its because we’ve had to endure months-long quarantine, but just watching Grace made one feel claustrophobic and anxious.

And that’s before the cabin nightmare culminated in Paul’s most despicable act of violence yet — tying her up and raping her.

Grace taking back control of her life was a process. She had to go into hiding. You couldn’t blame her with Paul on the loose.
It was a frustrating process trying to capture Paul. It reminded you that the strides made combatting domestic violence have taken time. And we still have a long way to go.

Paul was wanted and considered a fugitive, but it didn’t feel like there was any real urgency. He was still within the tri-state area. He was staying with his well-known friend and business associate.

Grace had to change her name, relocate, and go off-grid, leaving her life and her loved ones behind. Paul barely committed to any of that himself. And yet he kept eluding authorities.

If Grace wasn’t on their asses like white on rice, they probably never would have caught up with him. Technically, they still didn’t. They were too late. And it shouldn’t have taken the death of two more people and him abusing another woman for months before his chapter closed.

Grace did everything she could to bring Paul to justice, and she still carries the guilt of not getting him in time before his murder-suicide. She still beats herself up about not being able to save Neva.

Sleeping With Danger was an emotional ride, but a good one, nonetheless. Dare I venture to say it’s one of my favorite Lifetime films in a while. I cannot gush enough about the incredible performance by the leads, and the story was well-written and executed to near-perfection.