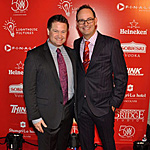 The Vancouver International Film Festival marked its kickoff weekend with a lineup of red-carpet parties and galas. The festival began with the 12th annual Brightlight Pictures Red Carpet Party, hosted by Shawn Williamson at CinCin Ristorante. Vancouver Mayor Gregor Robertson was among the actors, directors and producers walking the red carpet.

On the other side of town, the gala screening of Nebraska at the Centre for Performing Arts had movie star and Saturday Night Live alum Will Forte in attendance. Following the screening, guests celebrated at the VIFF opening gala at The Vancouver Club.

The following evening Lighthouse Pictures had its annual party at the Shangri-La Hotel, featuring Entertainment Tonight Canada’s Rick Campanelli as the host of the red carpet festivities.